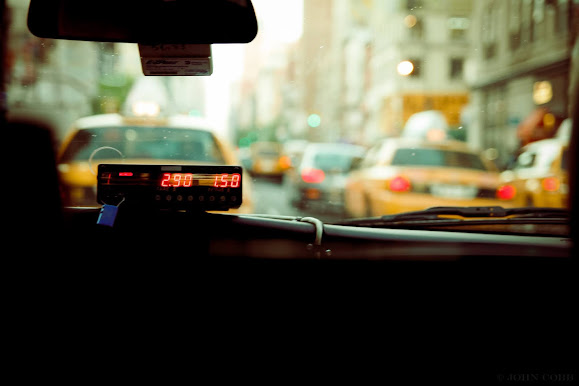 "Take me to 1st St. Vincent Street" he said.

"Will do," replied the taxi driver.

The man approached the cab, smelling of rum and sweat. The stench was so foul, the taxi cab driver had to cover his nose.

"Why are you out so late?" asked the cab driver, almost wiping the sweat from his brow. The man looked completely worn out. His face was expressionless, and the only sense of feeling from him was the feeling of disinterest.

"No reason." he replied. Silence shrouded the cab for quite awhile. There came a fit of traffic, just in the nick of time to make the two stay together for longer than necessary. The cab driver noticed the man had a name tag on that didn't refer to the place where they had just come from.

"No." he replied. Again, an awkward silence was cooping the two in a box of anxiety.

Mitch looked around the cab. Swinging from the mirror was a cross, and a hula girl danced back and forth on the dash. Mitch felt an incredible urge to identify the cab driver. Finally, he spoke up.

"It's Friedrich, but my friends call me 'Fry.' for short. Nice to meet you!" Fry so desperately wanted to ease the tension. He always had trouble in uncomfortable situations.

"Nice to meet you too," Mitch replied back. As he said this, there was a certain, uncertain tone. He noticed Fry was wearing a watch, and how he was obsessively checking over it while they sat there in traffic. "Why are you checking your watch so much Fry?" he scowled.

"Oh...uh...I've got somewhere to be. Just trying to make sure I drop you off as quick as possible!" This was a lie, and under the mild grin Fry had, Mitch could see he was being disingenuous. It didn't seem to be coming from bad intentions, though, Fry just looked a bit uncomfortable. Fry was an older fellow, with a balding head, and was a bit pudgy. His face shined cheeriness, even in his anxiety. He appeared very strong because he understood what he couldn't.

Mitch seemed like bad news. On his face were tear tattoos, and along his arm was a tattoo of a long knife. He was a bit hairy, had a long jaw, with an extruding brow ridge. But there was a certain look in his eye. He seemed far from free of himself.

Out the window shined lights of blue and orange. It was late at night in New York, and even though it was Saturday, everyone appeared to be slow. The night almost seemed to drag everyone along with itself, almost as a protector of the tired.

In Mitch's drunkenness, time proceeded with little regard for his mood. He seemed to want to stay in a manic state. But in Fry's rear-view mirror, the image of him was clear.

"Hey, if there's anything on your mind, it might help if you tell someone about it."

Fry was a bit confused. "I'm not sure what you mean." He did quite understand it, though, at least a little. "But if you mean, 'How do I find love', it comes from within." He knew there was more to the question but only proceeded with caution.

"No, why do I look through the window with bliss? But in the back of my mind there's a ghost of the world in which its purpose is to catch up with me and tear me away from my love?" Mitch slurringly said.

"I understand." he replied. Even though Mitch was drunk the feeling made sense to Fry. "When you're stuck on a train, you just don't want to get off. It's an uneasy feeling but through and through, the end of the tunnel isn't too far away." Fry looked back hoping this answered his question.

"But when you get pulled back, it feels as though every fabric of your mind is deteriorated. It feels as though there are demons ripping you limb from limb, as though you were in hell. Hell must disappear when you get used to it then. But even with the joy I feel within when a full day has been wrapped up, there's always a full ring of fire waiting to blind me when I leave. The joy I experience leaves me empty, because it is only what I make it."

There was a longer pause than before. Fry eventually tried to cheer him up, "Hey, it can't be so bad man. If it was, there wouldn't be so many people living the life they live. Is there nothing that gives you happiness?"

"There was someone." Mitch responded.

"Something I never want to happen again." Mitch's eyes seemed to gather tears.

"Hey, look, you don't have to tell me what happened if you don't want to, just know that there aren't any judgements around here. If there's something you or I did or didn't do, what matters is that we continue forward with what we're left with."

"You don't understand. If I know I can do what I did, why should I let myself be happy? There's no use in it. There's only a burning fire with its ears in the sky. The chaos in the world is a poem when you view it through the lens I do. You just want it to get bigger. She was fine and beautiful and I had to ruin it."

"Mitch, don't worry, I've felt what you've felt before. Guilt consumes the best of us in its shallowness. But what I've learned through the years was that you can't run from a situation. Even if it seems benign to answer its calls directly, you need to try. Following a path of guilt can lead to some incredible harm. If you don't look at what life's hope is, you will never find its reason. While it seems naive to continue down the path of trying when all its done is lead you to the same bad result, the path is not completely empty. The destination is hard, but anytime you feel even the smallest sense of peace, you know that what you've done for yourself has made an impact on the world. It may seem small, but your energy when placed correctly will reverb through the universe, and all evidence of you will be within the spirit of the next living creatures. You will have made a lasting impact. But you need to solve its negativity now before it's too late. The hope of the future rests in your actions. All you can decide for yourself is whether or not you find it worthy to hope for a better future, or lose yourself to a deathly spin." This took all of the breath out of Fry. He seemed to be very interested in this topic, and it seemed to have been something he's thought about before.

They arrived at Mitch's destination. It was unknown what the destination was for, but it looked like some sort of bridge. Fry looked on the side of the river under the bridge where a mattress lay.

Mitch got up and left the cab. Hope was his parade, and the dance ensued.