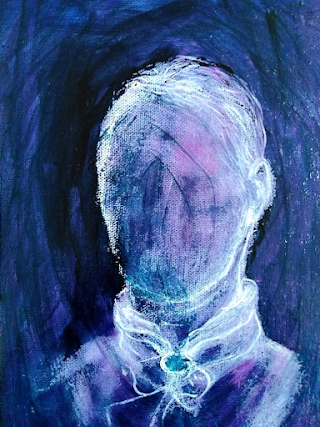 There was a court case. I was surrounded by indecipherable people with blurred faces and distinguished hats.

Their heads were big, and so were their mouths as they yelled "Death Row!"

The judge and jury looked like a group of clones, the judge was especially hard to make out.

"I must be drunk, I must be dying" I thought to myself

The judge's horns made an appearance as he fought me with his words. He was connected to me.

My mind started believing my heart to be gone, and my heart started to believe I was evil, as I sat and got judged by the whole world for something they will never know.

My head was sweating and my eyes were red, and I didn't know what else was going through my mind. It was all a blank as I scratched my head trying to remember who I was or why I was hurt.

The judge didn't care about my agitation, his tone was set on explosive, as he ate a mouthful of blood.

"Why are you trying to hurt me?!" I said to the judge.

"You disgusting criminal, you sit with the eyes of an eagle looking at your death sentence with admiration. You've committed sin, and you will pay." The judge forced himself to say this loudly and clearly, and without punching too hard.

The thing is, I don't know what I did, and neither did the judge. But it was a feeling enough to guilt me into submission. I sat there and persisted, and the judge moved me.

So there I was, staring at myself with the same decided look I gave on the day I turned aware. The same guilt, the same misery and the same foolishness that only those with the lowest self esteem would believe. And I believe it fully.

The judge taunted me, and is taunting me now, and the judge hurts those around him for a semblance of justification to himself.

His eyes follow the money, his nose follows the brain, and his brain defeats mine every so often in a war for identity.